Are the Kids Alright? Young People and Mental Health

Are the Kids Alright? Young People and Mental Health

Mental illness is often thought of only as an adult concern. But about half of mental illnesses begin to reveal themselves in childhood. What is the state of children’s mental health and how is it different from that of adults?

American children and adolescents with a serious mental disorder (2)

Mental disorders that begin by age 14 (2)

In any given year, only 20% of children with mental disorders are identified and treated. (2)

Mental health problems can lead to issues with family and school — and can even lead children to attempt suicide.

Youths in juvenile detention with at least one mental illness (2)

Identifying and Treating the Problem

Early identification and adequate treatment can quite literally be the difference between life and death for young people with mental illness.

Signs can vary depending on the disorder and age of the child.

Though children’s brains are still in a state of development, adequate treatment of mental disorders can help put a young person on a path to a healthy future. 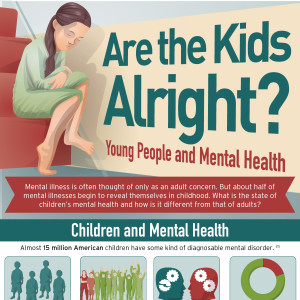