The Highs and Lows of Bipolar Disorders

The Highs and Lows of Bipolar Disorders

Nothing new, just a new name
for Manic-Depressive

Then:
5,000: Number of years ago that manic-depressive disorder was documented

Now:
5.7 million: number of adult Americans affected by bipolar disorder (or 2.6% of population) today
25: average age for beginning of bipolar disorder
50/50: men and women get bipolar equally
3X: But women are 3 times more likely to experience rapid cycling with B.D.
6: Bipolar disorder is 6th leading cause of disability in the world.
9.2: Number of years subtracted from your lifespan if you have B.D.
8 of 10: Number of those with B.D. who think about suicide at least once in their life.
1 in 12: Number of those in general population who will think about suicide in their life

Depression:
• Depressed mood most of the day, nearly every day, such as feeling sad, empty, hopeless or tearful
• Can appear as irritability
• Markedly reduced interest or feeling no pleasure
• Significant weight loss when not dieting, weight gain, or decrease or increase in appetite
• Either insomnia or sleeping excessively
• Fatigue
• Feeling worthless
• Decreased ability to concentrate, or indecisiveness
• Recurrent thoughts of death or suicide, or suicide planning or attempt

Factoid
25: Percentage of those diagnosed with bipolar disorder who commit suicide

If you think you may hurt yourself call 911
Other options:
Reach out to a close friend or loved one.
Contact a minister or spiritual leader
Call a suicide hotline number — in U.S., call the National Suicide Prevention Lifeline at 800-273-TALK (800-273-8255). Use same number, press 1 to reach the Veterans Crisis Line.
Make an appointment with your doctor, mental health provider or other health care provider. 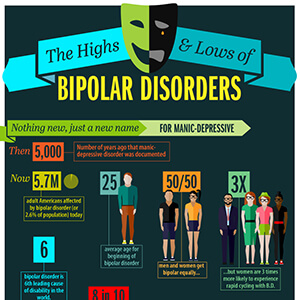