It’s fairly obvious to sufferers that stress has physiological symptoms. But apart from shaking hands, quickened breath and dry mouth, stress also affects your brain. Does long-term stress actually predispose you to mental illness? Let’s look at some facts, statistics and recent studies to find out.

Cause: Percent of stressed Americans affected

Post-traumatic stress disorder is unique in that it shows a direct link between extreme stress and mental health.

Number of American adults who suffer from PTSD (4)

PTSD often occurs with other illnesses such as depression, anxiety disorders and addiction.

Multiple studies have shown a significant connection between stress and mental health.

Main findings: Chronic stress creates changes in the brain that create a predisposition for mental illness.

Main findings: Using mice, researchers found that extreme stress in adolescents can change brain chemistry to allow for the onset of mental illness.

Main findings: Chronic stress may elevate levels of glucocorticoids in the brain. This reduces cell function and may lead to anxiety and depression disorders.

Stress and the Brain 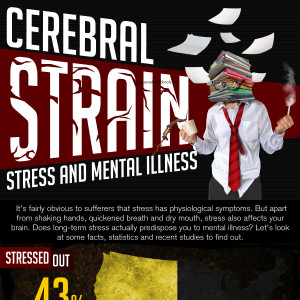