Self-injury is a serious issue among teens and a possible sign of underlying mental illness. Let’s take a look at this dangerous behavior and its causes.

Percentage of those who engage in self-harm who are pre-adolescents or teens, usually beginning at age 14. (1)

Percentage of group who demonstrate a lifetime prevalence of abuse (2)

Though the most talked-about type is cutting of the skin, there are multiple ways one might engage in self-harm, including: (2)

Hitting oneself with hard objects

Incessant picking at skin or scabs

Self-harm is often a sign of a specific mental disorder, and these disorders often occur alongside each other. The most common co-occurring disorders include: (2)

Percentage of high school students who admit to attempting suicide. 14.5% admit to considering it (3)

Number of people 12 and older who use illicit drugs, a common sign of mental illness or trauma in adolescents (3)

Though mental disorders are the No. 1 cause of self-harm, there are more specific reasons adolescents and children engage in the behavior. These include: (2)

Some adolescents may learn that engaging in self-harm helps them cope with stress or traumatic life events.

For some, self-harm takes focus off of intense emotions that are overwhelming. Sometimes this can be associated with sexual abuse.

Sometimes traumatic experiences can leave someone feeling numb. This inability to feel emotion may lead one to try and feel something physically, leading to self-harm.

Often, adolescents who engage in self-injurious behavior feel a lack of control of other parts of their lives. Some may live in environments where expressing emotion is looked down upon.

A child growing up and being told they are deficient or defective may feel shame and punish themselves through self-harm. 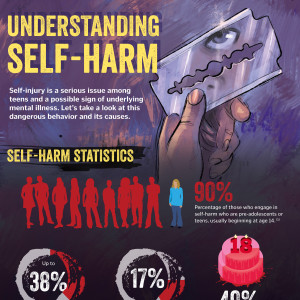