Are women caught in a war between evolution and careers?

Today the average age for marriage is:

But our biological clocks have stayed the same…

That means that only one out of four children has their biological parents in the same house until they are eighteen.

The trajectory of mating

Fundamental dilemma: women:
Access to resources with which to care for children and self
Access to suitable genes in males (attractive personal traits)

The optimal age for conditions to be met results in a 2-3 year discrepancy in the ages of partners.

Males profit from marrying earlier, females later, but one way or another evolved tendencies are going to get pushed aside.

Pros and Cons of marriage trends

The flags of a productive female workforce are raised, and once set familial boundaries are more porous than ever.
But why do the casualties have to be kids? 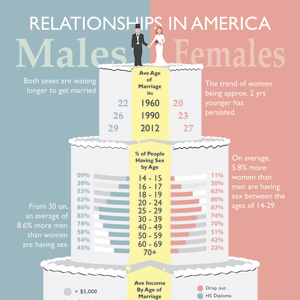