Is America a Nation of Java Junkies?

Amazing, but true: Some substance abuse clinics already view caffeine as a potentially hazardous substance and do not allow patients or employees to bring the contraband into the facility.

Symptoms of caffeine overdose (according to the APA):
Restlessness, nervousness, excitement, red face, twitching of muscle, rambling, rapid and irregular heartbeat, and sleeplessness

Never mind all that: How much do Americans love coffee?
Answer?: A lot
83 % of adults drink coffee in the U.S., the world’s biggest consumer of the beverage, up from 78 percent a year earlier.
400 million: Total number of cups we drink a day: that would fill up the Statue of Liberty 14.5 times
65% of us drink at least 13 cups of coffee a week
68 % drink a cup of coffee within an hour of waking up
300 mg: the average amount of caffeine adult consumes per day.
3 out of 5 coffee drinkers say they “need” coffee to start their day
3.2: average number of cups we drink a day
74 % of Hispanic-Americans drink coffee daily, 12 percentage points ahead of non-Hispanics.

How do we like to drink it?
35 % of coffee drinkers like it black
57 % add sugar or sweetner
20-30 % of all coffee sales are flavored coffees
Top flavors (in order): Chocolate, Vanilla, Caramel, Hazelnut, Cinnamon
Size counts:
9 oz: average size of a coffee cup
3,487 gallons: largest cup of coffee, created by De’Longhi (Italy), in London, UK, on November 5, 2012. Black coffee was used and the cup measured 9 ft 6 in. tall and 8 ft 8 in wide.

In defense of coffee drinking:
Benefits include alertness and attention, boosting metabolic rate, and reducing heart disease and diabetes risks.
People who drink a moderate amount of coffee are less likely to develop Alzheimers or dementia in old age
$30 billion: the business of coffee, and that means jobs
Can extend the lives of people who drink it daily, according to researchers at the National Cancer Institute.
Men who drink two to three cups a day had a 10 percent chance of outliving those who drink no coffee, while women have a 13 percent advantage
[the defense rests]

The Business of coffee:
$4 billion: amount of coffee imported annually
30 %: Brazilian output of coffee (Vietnam and Colombia are #s 2 and 3)
$165 total average of money spent on coffee each year by coffee drinker
34%: percentage of coffee drinkers who go to premium places (Starbucks, Coffeebean, etc.) for take out
29 % percentage of people who go to lower-price outlets (Mcdonalds, Dunkin Donuts, etc.) when out
$18 billion: Total amount of yearly money spent on specialty coffee in the U.S.

Totally awesome coffee facts:
1. Brazil once had such a coffee surplus, they tried to find other uses for it, including using it to make plastic
2. 82 cups of coffee in 7 hours: the world’s drinking record.
3. Coffee was so scarce in Germany that during WWII, “coffee bombs” or bags of coffee were dropped from planes to turn the people against their government.
4. There’s a tourist agency for people wanting to take coffee vacations called Cafe Away.
5. Finland drinks the most coffee per person. The United States is ranked number 12.
6. The only place where coffee is grown in the United States is Hawaii.
7. Kopi Luwak or Civet Coffee is the most expensive coffee in the world, selling at $120 to $600 per pound. Find it mostly in the U.S and Japan
8. $47.30: price of a Starbucks’ Quadriginoctuple Frappe. 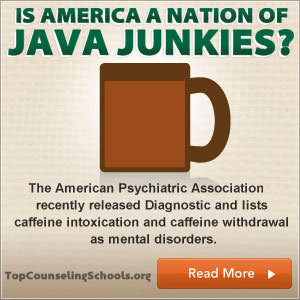