On Top of the World … Or Not: Happiness in the U.S.

On Top of the World … Or Not: Happiness in the U.S.

The definition of happiness differs from person to person, group to group. But based on measurable data including standard of living and mental health issues, countries and their residents can be ranked and compared by their overall happiness. So where does the U.S. fall and how does it compare to nations across the globe?

With a relatively high standard of living, Americans generally are happier than those in other countries around the world. But what does that really mean? What are they happiest, or unhappiest, about?

What it covers: Liking your daily activities and feeling motivation to achieve your goals

What it covers: Having supportive relationships and love in one’s life

What it covers: Managing economic life to reduce stress and enhance security

What it covers: Liking where you live, feeling safe and taking pride in community

What it covers: Having good health and ample energy to get through the day

Why Aren’t We Happier?

With just one-third of Americans saying they’re very happy, what factors might be contributing to our moodiness?

Percentage of both full- and part-time workers in the U.S. satisfied with their jobs (1)

Americans who experience homelessness each year (6)

So how do Americans stack up against people in other countries? As you might expect, we’re not the happiest, but we’re not the most miserable either. According to a United Nations analysis of national sentiment, the happiest people in the world live in Denmark, Norway, Finland and the Netherlands. The least happy?

Those factors and others were combined to determine each country’s life satisfaction score, on a scale of 1-10.

Democratic Republic of the Congo, 4.6 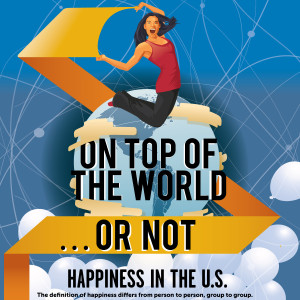