Every year:
1,825 die from alcohol-related unintentional injuries, including motor vehicle crashes.
599,000 are unintentionally injured under the influence of alcohol.
696,000 are assaulted by another student who has been drinking.
97,000 are victims of alcohol related sexual assault or date rape.
Unsafe Sex: As a result of one night of excessive drinking, 13 % of college students reported having unprotected sex
More than 100,000 students report being too drunk to know if they consented to having sex.
25% of college students report having academic consequences due to drinking.
19% met the criteria for an alcohol use disorder
5,860,000 drive under the influence of alcohol.

Fact: Near-daily use of marijuana has surpassed daily cigarette smoking. Only 5.2 percent of college students said they smoked cigarettes every day, down from about 19 percent in 1999.

Stimulants are abused for many reasons, including –
– Help focus studying
44% use stimulants to study or improve academic performance
– Athletic performance
– Staying awake
31 % say they misuse or abuse them to stay awake

Full time college students are 2x more likely to abuse Adderall than their peers who aren’t in college.

Of those abusing stimulants, 57 % received the medication from a friend.
16 million prescriptions for stimulants like Adderall were written in 2012
That’s 3X more than in 2006
10 % report obtaining it from a family member
6 % from a “dealer”

All of which are prescribed for Attention Deficit Hyperactivity Disorder (ADHD) 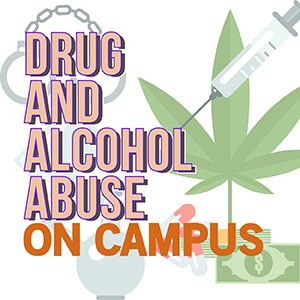