Loneliness is More Deadly than Obesity

Mortality rates for lonely people:
○    1.5 – The lonely are 50% more likely to die than the un-lonely

○    “Being lonely isn’t bad for you, but staying lonely is.” -John Cacioppo, Social Neuroscientist, University of Chicago

■    Lonely adults were more likely to:
●    1. indulge in self-destructive behaviors
●    2. not have secure support support from others
●    3. have increased feelings of stress
●    4. have lowered immune and cardiovascular systems
●    5. have sleeping disorders

●    Loneliness has a complex definition that differs for everyone
○    the psychological embodiment of our perceived discrepancy between desired levels of social interaction.

■    2 types of social interaction Quantity vs Quality
●    Experts say it’s not the quantity of social relationships but the quality that really matters.

●    1. Number of total social contacts (acquaintances)
○    Average number of friends on facebook: 303
○    “We are all so much together, but we are all dying of loneliness.” – Albert Schweitzer [1952 Nobel Peace Prize winner]
●    2. Number of quality relationships (confidants)

“Some of the most profound loneliness can happen when other people are present,” says Harry Reis, professor of psychology at the University of Rochester.

●    More studies are needed to find out why Americans are losing confidants
○    Current Hypotheses:
■    America became a more transient society
●    More willing to move away from home for a job
●    Studies have shown that degree of loneliness in new surroundings reflects the number of miles from home
■    Entertainment
●    people have more entertainment tools such as TVs, computers, mobile devices, so they can stay home and tune out.
●    the “Internet paradox.”
○    contradiction of increased connection to humans and a lack of human contact
○    “The [more] face-to-face interactions, the less lonely you are, the [more] online interactions, the lonelier you are.” -John Cacioppo
●    Facebook
○    Studies show that the more people used Facebook the worse they subsequently felt.
●    Mobile
○    Digitally Socializing in the presence of others indicates someone somewhere else is more important. 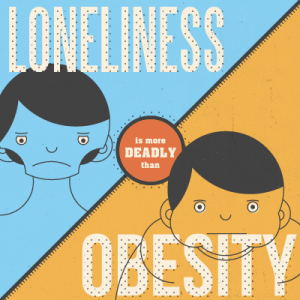